In task-oriented dialogue systems, the spoken language understanding, or SLU, refers to the task of parsing the natural language utterances into semantic frames. The problem of contextual SLU majorly focuses on effectively incorporating dialogue information. Current SLU systems that work in tandem with ASR (voice bots) only incorporate the asr transcription as an input for the SLU systems to predict intent. As such, the amount of information these transcripts have is quite less.

If we observe the first example here, the trancription just consists of ‘yes’, but if we include the bot prompt, we enrich the input to our SLU, thereby increasing the overall intent classification performance. The context of hathway broadband connection helps in enriching the context of the utterance yes.

We curated a private dataset of clients wherein we collect user utterances along with all the bot prompts. We then concatenate the bot prompts with the user utterances. After retraining our intent classification model on some clients, we observed a performance jump of 20-30% in the intent-F1 scores.
This probably happened because our user transcriptions are not rich with enough information. By closing that information deficit via the bot prompts, the overall input helped us in achieving better performance. Another probable reason for such a huge jump could be probably because the transcription generated while using voice bots are less accurate as compared to a chat bot’s transcription wherein a user types their response. As a result, the gap increment when supplied with contextual information when working with voice bots is much larger than let’s say a bot. However, this was not the case with all our datasets. We observed that the datasets with large number of classes didn’t perform well or at par with datasets with less number of classes. One probable reason for it could be the dataset having a large amount of granularity with respect to intents and as such there wasn’t any significant bump in the performance. We also observed that the performance with small-talk intents such as confirm, deny etc. had a massive jump in their performance as compared to other types of intents.

Some probable approaches from literature

After observing an improvement in our models by just using a single bot prompt, we decided to a delve a bit further and found out many approaches that can be utilized for our use-case. While doing literature review, we observed that encoding the contextual prompt along with the user prompt gives the best performance amongst all the methods. The current approach of concatenating bot prompts with the user prompt acts as a natural baseline for our subsequent experiments in this direction. We discuss the encoding based approaches from the literature below:

A stacked BiRNN tagger is then used to model intent classification.

This approach was benchmarked on a multi-turn dialogue sessions and for intent classification specifically the task of reserving tables at the restaurant. The intent F1 scores with memory network as the contextual encoder is 0.890 and just by encoding the last prompt is 0.865.

The system act encoder encodes the set of dialogue acts \(A^{t}\) at turn \(t\) into a vector \(a^{t}\) invariant to the order in which they appear.

The utterance encoder takes in the list of user utterance tokens as input. Let \(x^{t}\) denote the utterance token embeddings, which is encoded using a bi-directional GRU. \(u^{t}, u^{t}_{o} = BRNN_{GRU}(x^{t})\) We get the embedding representation \(u^{t}\) of the user utterance and \(u^{t}_{o}\) is the concatenation of the final states and the intermediate outputs of the forward and backward RNNs respectively.

The dialogues are obtained from simulated dialogues dataset.The dataset has dialogues from restaurant and movie domains with total of 3 intents. The baseline for this approach was getting results without any context and the overall intent accuracy was 84.76% whereas using the previous dialog encoder (\(o^{t-1}\)) and the current system encoder (\(a^{t}\)) was 99.54%. 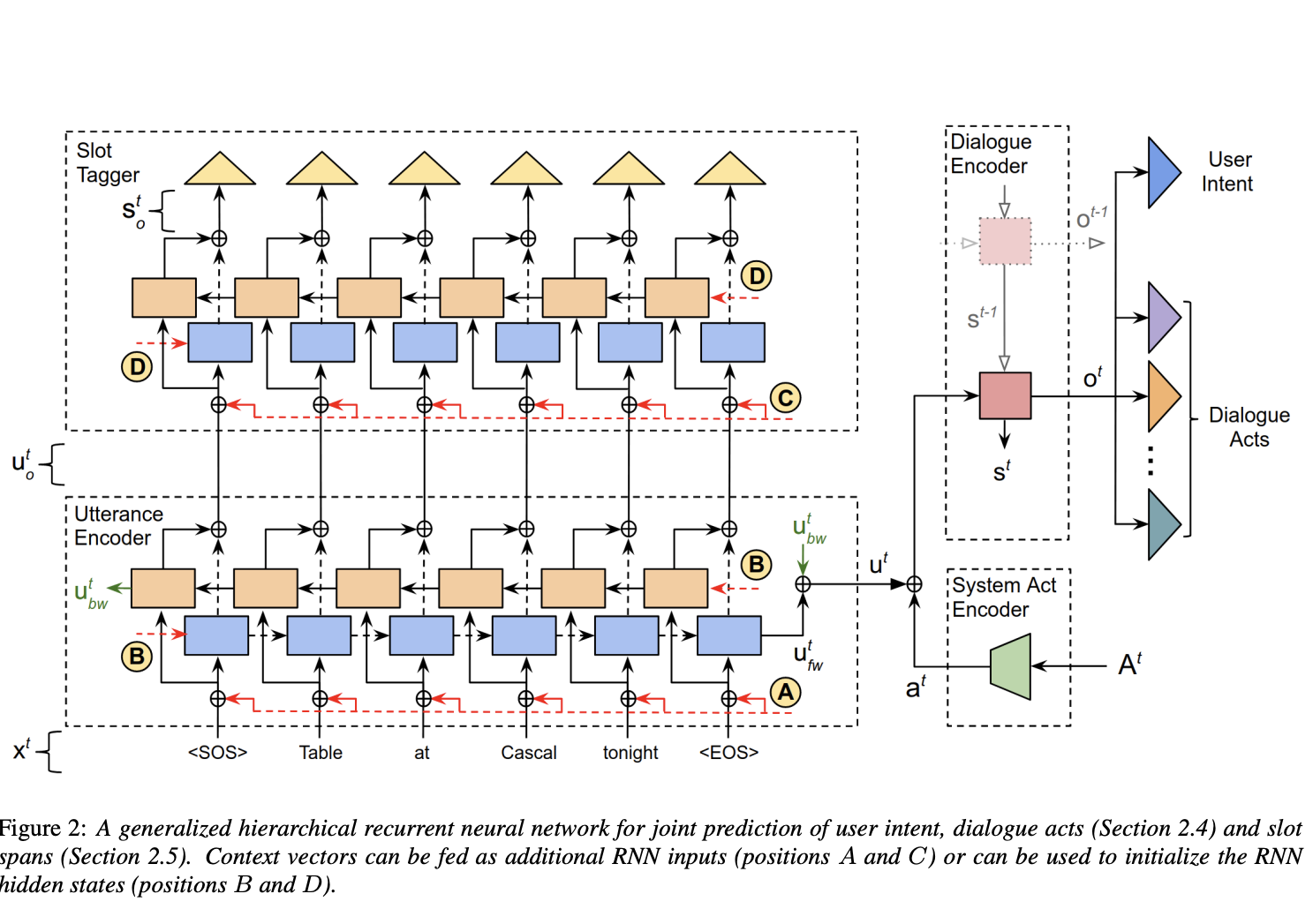 The above approaches and experiments show that context for SLU predictions can prove to be extremely useful for improving intent F1 scores. These above approaches are also not computationally expensive and can be easily deployed at scale for various use-cases.