This blog post is based on the work done by Anirudh Thatipelli as an ML research fellow at Skit.ai

End Of Utterance Detection - When does a speaker stop speaking?

End-of-utterance detection is the problem of detecting when a user has stopped speaking in a conversation.

In the above image, there are four turns in total that are time-aligned.. The system initiates the conversation by speaking first (“How may I help you?”), then the user (“I want to go to Miami.”), then the system again (“Miami?”) and finally the system (“Yes.”).

Despite going through many advances, the performance of spoken dialogue systems remains unsatisfactory. For example, turn-taking is a fundamental aspect of natural human conversation that helps to decide which participant has the floor in a conversation and who can speak next. Humans use many multimodal cues like prosodic features, gaze, etc to determine who has the floor in a particular conversation. The interaction is very smooth with very less gaps and overlaps between participants’ speech, making its modeling difficult. Currently, dialogue systems use a silence threshold to determine whether it should start speaking. This approach is too simplistic and can lead to many issues. The system can interrupt the user mid-utterance, known as cut-in. Or it can wait too long and leads to sluggish responses and possible misrecognition, causing an increase in latency.

A dialogue system designer should also consider the trade-offs between cut-ins and latency. For Skit, an effective turn-taking system will improve customer service and decrease call-drop rate. Imbibing turn-taking capabilities into our product will make it more natural and improve the conversations with customers.

Previous approaches to solve the problem

One of the earliest models to study conversations was designed by Harvey Sacks et al in which he divided a conversation into two units of speech: Turn-constructional units (TCU) and Transition-relevant place (TRP) respectively.

Turn-constructional units are utterances from one speaker during which other participants assume the role as listeners. And each TCU is followed by a TRP, where a turn-shift can occur by the following rules:

To identify these TCUs and TRPs, researchers segment the speech into Inter-Pausal Units (IPUs), which are stretches of audio from one speaker without any silence exceeding a stipulated amount(say, 200 ms). A voice activity detection(VAD) can detect these IPUs. Hence, a turn can be considered as a sequence of IPUs from a speaker, that are not interrupted by IPUs from another speaker.

To identify TRPs(turn-yielding cues) and non-TRPs(turn-hlding)cues, many cues such as syntactic completion, prosody and non-verbal cues like eye-contact have been investigated. However, it is very complicated to directly detect such cues from the data. This problem is compounded by the absence of facial cues in our data. End of utterance task can be also defined as the detection of TRPs, i.e. when the user’s turn is yielded and the system can start to speak. There are a multitude of works done in this regard, that can be divided into three types: 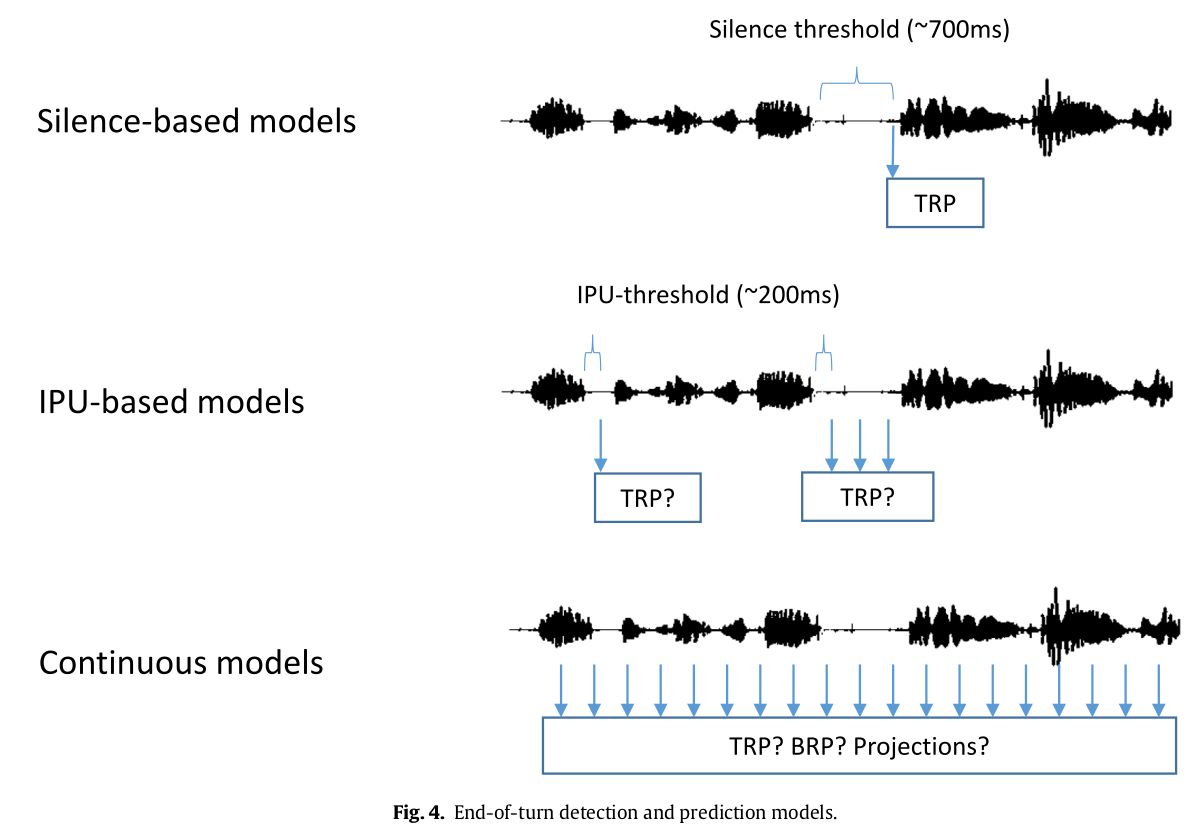 We will go through each of the approaches in the following sections:

As mentioned above, existing architectures use a fixed silence duration detection threshold to determine if the speech has ended. VAD utilizes energy and spectral features to distinguish between noise and speech in the audio. Two types of parameters are taken into consideration while designing these kinds of models.

These simplistic models break down if the user takes too long to respond. Or when the system might interrupt the user’s speech.

Tuning the threshold for different domains is extremely difficult and user satisfaction will be affected.

These systems are built on an assumption that the system should not start to speak while the user is speaking. Turn-taking cues at the end of pauses are used to determine whether a turn has ended. These approaches run the gamut from hand-crafted rule-based semantic parsers to machine-learning and reinforcement learning models.

Sato et al’s work inputs over 100 different kinds of features like syntactic, semantic, final word, and prosody to decision trees to model when to take a turn. Albeit simplistic, their model achieved an accuracy of 83.9%, compared to the baseline of 76.2%. However, this approach can misclassify the IPU as a pause and uses a fixed threshold of 750 ms for pauses. To overcome this limitation, Ferrer et al condition a decision-tree classifier on the length of the pause after IPU continuously and classify on the prosodic features and n-grams of the words. Raux and Eskenazi cluster silences based on dialogue features and set a single threshold for each cluster, minimizing the overall latency by over 50% on the Let’s Go dataset.

Another shortcoming with the above approaches is that they are trained on human-computer dialogue corpus. But we want to learn a model for human-human dialogues. Transferring models from human-human to human-computer based systems is not feasible. So, some authors like (Raux, Eskenazi & Meena et al. use bootstrapping. First, a more simplistic model of turn-taking is implemented in a system and interactions are recorded. Then, the data is then manually annotated with suitable TRPs, and trained using a machine learning model like LSTM. Another approach is a Wizard-of-Oz setup, where a hidden operator controls the system and makes the turn-taking decisions as used in Maier et al.

Some previous approaches utilize reinforcement learning as well. For example, Jonsdottir et al train two agents to talk to each other, picking up prosodic cues and develop turn-taking skills. Khouzaimi et al. train a dialogue management model intending to minimize the dialogue duration and maximize the completion task ratio. But these approaches are trained in simulated environments and it is unclear if they transfer to real users.

Continuous models process the utterances in an incremental manner. These modules process the input frame-by-frame and pass their results to subsequent modules. It enables the system to make continuous TRP predictions, project turn completions and backchannels. Unlike previous approaches, the processing starts before the input is complete. The processing time is improved, and the output becomes more natural. There is no need to train the model for end-of-turn detection. It enables a deeper understanding of utterances and project backchannels and even interrupt the user.

One of the first works in incremental processing was Skantze and Schlangen on the task of number dictation. A benefit of incremental models is revision, as shown by Skantze and Hjalmarsson. For example, the word “four” might be amended with more speech, resulting in a revision to the word “forty”.

Another work by Skantze doesn’t train the model for end-of-turn detection. The audio from the speakers is processed frame-by-frame (20 frames per second) and fed to an LSTM. The LSTM predicts the speech activity for the two speakers for each frame in a future 3s window. The model outperforms human judges in this task. In an extension to this work, Roddy et al. propose a new LSTM architcture where the acoustic and linguistic features get processed in separate LSTM systems with different timescales.

Most of the aforementioned works evaluate their performance on dialogue based datasets like:

that have a limited purpose and may not generalize well to our problem.

While significant work has been done in end-of-utterance detection, most of these models have shortcomings. Firstly, most are trained on dialogue-based datasets only without accounting for speech-level features. Secondly, these datasets are well-curated with less noise in the background which is not the case for our datasets. To account for noise and model audio and text jointly, we will need to retrain our models with new baselines.