Theory of Mind and Implications for Conversational AI

Consider this example: You’re out in the street in a crowded area. A stranger walks upto you and asks for directions in your local language, L. You responded, you notice the facial expressions of the stranger and that they seem to be confused, and do not understand what you said. Now, you’re confused as well, and try to clarify your instructions, but the stranger later reveals that he isn’t very fluent in the language L; hence you ask for whether they understand a globally-used language E, the stranger confirms, and the conversation continues.

This mechanism of having expectations from the other participant is a basis for successful conversation. If we lacked such an ability, the emergence of mutually accepted meanings of words, and language itself would be impossible. This also applies to non-verbal communication, such as body language and facial expressions, and to some degree, is observed in many animal species.

We now dive deeper into this aspect of communication, and formalize why both, human-human and human-machine conversations breakdown and/or lead to frustration of the participants.

Whenever we converse, we take into account what we expect the other person to understand through our words as well as their possible responses. The ability to conceive such “theories” of other participants’ mental states is termed as the Theory of Mind (ToM).

Having ToM requires the agent to acknowledge the fact that others (including the agent itself) can believe in things which are not true. These beliefs are called false beliefs. An agent possessing ToM can identify their own as well as other’s false beliefs and take actions to confirm and hence correct these false-beliefs.

What makes a conversation human-like?

A dialogue is human-like if both agents participating have some degree of Theory of Mind.

Theory of Mind is not limited to the content of the speech (such as the words spoken), but also addresses the mannerism of speech (prosody), facial and other non-verbal cues etc. It is easy to see that if any one of the agents lack ToM or have a poor ability, the conversation becomes uncomfortable and frustrating.

However, Theory of Mind is an acquired skill, expertise of humans on ToM matures over the lifespan [2], in-addition to depending on the amount of socialization the person part-takes in. This makes quantifying the degree of expertise over ToM difficult, hence quantifying the degree of human-likeness is also difficult, in-addition to being be subjective.

Testing the Presence of Theory of Mind

Testing whether or not an agent is capable of modeling mental states of others is important for many reasons, one such application is diagonosing mental disorders. Such tests are called false-belief tasks. These tests check whether the agent can model other’s false-beliefs and/or confirm and correct its own false-beliefs. We will discuss two popular false-belief tasks: “Sally-Anne” and “Smarties” tasks . 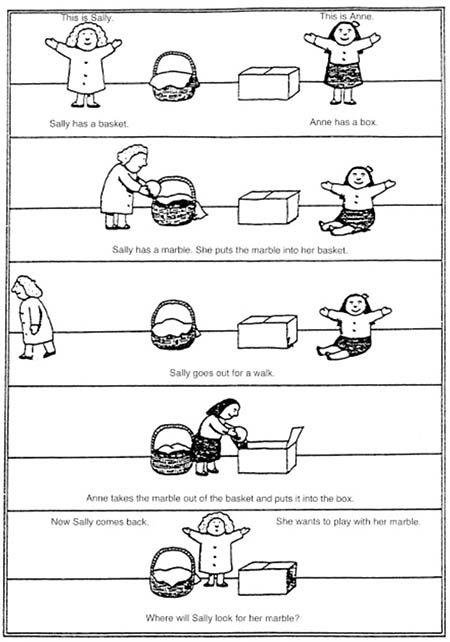 The participating agent is told the following scenario:

Smarties is a popular brand of candies.

Theory of Mind is an acquired skill, and is not innate, i.e., we aren’t born with the ability to model other’s mental states. A study [1] shows that children first pass False-belief tasks at around 3-4 years of age, around the same time as children first learn to tell lies, suggesting that learning to lie is a pre-cursor to possessing ToM. This does make sense, as lying would only help if the other participant is capable of having false-beliefs. Language and communication are also acquired skills.

Having ToM allows for certain mechanisms that would not be possible otherwise. Some are listed below:

Do Machines have a Theory of Mind?

One of the important goals of AI is to blend in the lives of Humans and solve problems with humans-in-the-loop, achieving this requires modeling humans and other machines around the agent, similar to how we humans do.

Some studies [3, 4] have shown that specially designed Multi-Agent Reinforcement Learning algorithms pass the Sally-Anne False-belief task. However, False-belief tasks have not been designed for/tested against chat/voice bots. In this section, we test multiple Language Models (LM) against the Sally-Anne and Smarties tasks, and check whether they pass the tests or not.

All of the experiments were done using Huggingface’s Hub has inference interface. These experiments can be easily re-ran, however, it is not guarrenteed to get the same results since the inference is non-detereministic. The tasks are widely used and are available in Wikipedia and other scientific papers on which some/all of the LMs may have been trained on, hence these tests are not conclusive.

Input Text: Sally and Anne are inside a room. Sally has a basket with one marble inside it. Anne has an empty box with her. Sally leaves the room without her basket. Anne takes the marble out of Sally's basket and puts it in her own box. Sally comes back inside the room. Sally will look for her marble in If the LMs continue with her basket, the basket or anything similar, the LM passes the test, else it doesn’t.

If the LMs continue with candies or anything similar, the LM passes the test, else it doesn’t.

The largest three of the models pass both the tests. This suggests that scale might help LMs achieve some basic reasoning capabilities. This result is not surprising, since larger LMs usually do better in reasoning benchmarks.

P.S. The most entertaining response award goes to DistilGPT2 for "I don't give a fig about the box" for the Sally-Anne task. This is not made up, I swear!

Open-domain chat has one important goal, engagement with the user. The user engages with the bot if the bot is entertaining the user. For this statement to hold true, the bot should appropriately make responses, which in-turn requires modeling the user, i.e., having a Theory of Mind. The degree of engagement can be seen as a measure of degree of ToM of the bot.

Testing ToM is straight-forward for Open-domain (chit-chat) bot. However, this is tricky for goal-oriented bots, as they are designed to handle dialog under a specific domain. False-belief task defined on one domain maybe out-of-domain for another domain.

Open-domain dialog is a strict generalization of goal-oriented dialog. However, goal-oriented may have goals which are defined differently from engagement. In many call-center settings, call resolution is the most important goal. However, when voice bots are used in-place of human agents in call centers, a new and different behaviour of users arises: call drop. Users simply drop from the call if they:

Most bots in the industry are designed in a way that assumes the user trusts the bot and has infinite patience. The bot’s behaviour is apparrently designed to optimize for resolving queries of the user, however, not to inspire trust in the user that the bot is capable to resolve queries.

There are two possible ways to “solve” this problem:

The first method is the industry standard, and it doesn’t seem to be working well. The second method has the clear advantage of being data-driven and scalable.